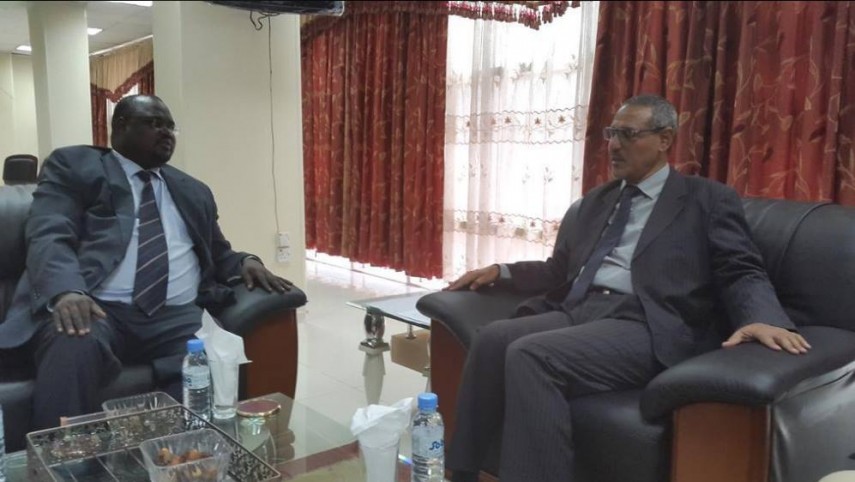 CEWARN Director Mr. Richard Barno and team held a meeting with Sudan’s national Conflict Early Warning and Response Unit (CEWERU) steering committee in Khartoum on 17 September 2014. The main aim of the meeting was to reactivate the national CEWERU Steering Committee and consult on the national unit’s capacity needs in light of the CEWARN 2012-2019 Strategy framework.

Speaking at the opening of the meeting Mr. Barno recalled that Khartoum is the birthplace of CEWARN as it where the IGAD Heads of State passed the historic Khartoum Declaration in 2000 that contained the decision to establish CEWARN.

He added, it is also where the protocol establishing the mechanism was signed in 2002. The full day event included a presentation on the current status of implementation of the 2012-2019 strategy framework by Mr. Barno and plenary discussion as well as internal reflection sessions to assess national and cross-border conflict challenges facing the Republic of the Sudan.

The sessions also identified short and long term measures to boost the CEWERU’s early warning and response capacity. Mr. Barno indicated that some of the CEWARN Unit’s immediate priorities include supporting national CEWERUs to adopt new ICT tools as well as expand their local civil society networks and partnerships with specialized institutions.This is aimed at improving the mechanism’s early warning and response output at the national level.

Before concluding his mission in Khartoum, Mr. Barno held a meeting with the Commissioner of Sudan’s Humanitarian Aid Commission Mr. Ahmed Adam and briefed him on CEWARN’s operations in the IGAD region as well as its current priorities in light of the 2012-2019 Strategy Framework.

At the moment, the CEWARN Rapid Response Fund (RRF), that supports local-level conflict prevention and peace building initiatives across the region, is supporting two response projects in the Republic of Sudan. One of these projects that is worth USD 50,000 focuses on producing an elaborate baseline survey for the Blue Nile State of the Republic of Sudan that contains demographic analysis, an appraisal of the peace and security situation in the state including causes of conflict as well as a mapping of ongoing peace initiatives. The survey is intended to inform future CEWARN conflict mitigation and peace building interventions in the state.

The second project which is also worth USD 50,000 is a peace building project targeting Assalaya, Al-Ferdous, Abu Matariq, Abu Jabra localities of the East Darfur State of the Republic of Sudan. The project that entails various training, awareness raising and local peace dialogue initiatives targets vulnerable communities that are affected by the ongoing conflict in the area.