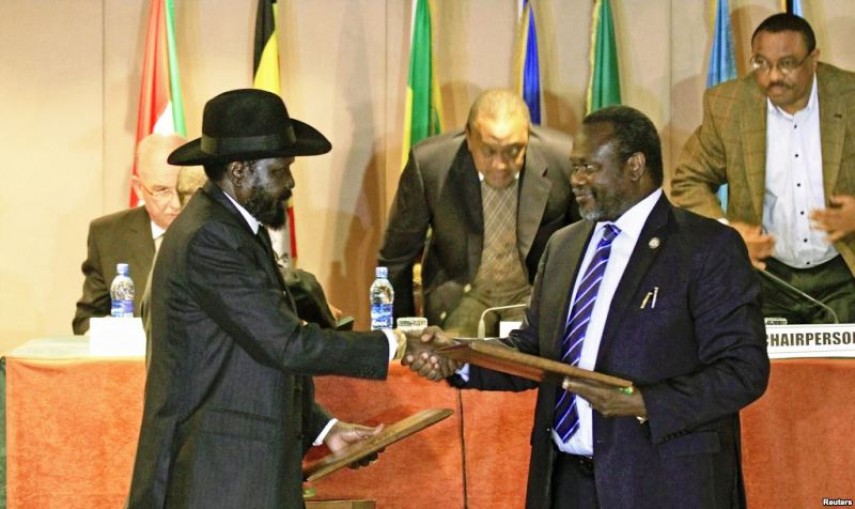 The signing ceremony that was held on 2 February 2015 in Addis Ababa was witnessed by Prime Minister of Ethiopia and Chairperson of IGAD Assembly of Heads of State and Government H.E. Hailemariam Dessalegn; President of the Republic of Kenya H.E. Uhuru Kenyatta; IGAD Executive Secretary Amb(Eng.) Mahboub M. Maalim; Commissioner for Peace and Security of the African Union Smail Chergui; Development Partners of IGAD as well as other dignitaries.

The Agreement states that the two Parties agree to establish a Transitional Government of National Unity by 9 July 2015. The TGoNU will have a 30 month term that will be preceded by a three-month pre-transition period. The Agreement further states that the Parties agree to resolve all other outstanding issues of the conflict no later than 5 March 2015 and for the pre-transition period to begin on 1 April 2015.

According to the Agreement, the tasks of the TGoNU will include restoring peace, security and order in the country; expediting the relief, repatriation, rehabilitation and resettlement of IDPS and returnees; facilitating a process of national reconciliation and healing through an independent mechanism as well as overseeing a permanent constitution-making process among others.

Other terms of the agreement include power sharing ratios of ministerial and other portfolios of the TGoNU as well as the establishment of a Joint Monitoring and Evaluation Commission (JMEC) that will be responsible for monitoring and overseeing the implementation of the Agreement. The final phase of negotiations is scheduled to begin on 19 February in Addis Ababa and the Parties have agreed to complete negotiations on all the other outstanding issues and sign a Peace Agreement no later than 5 March 2015.