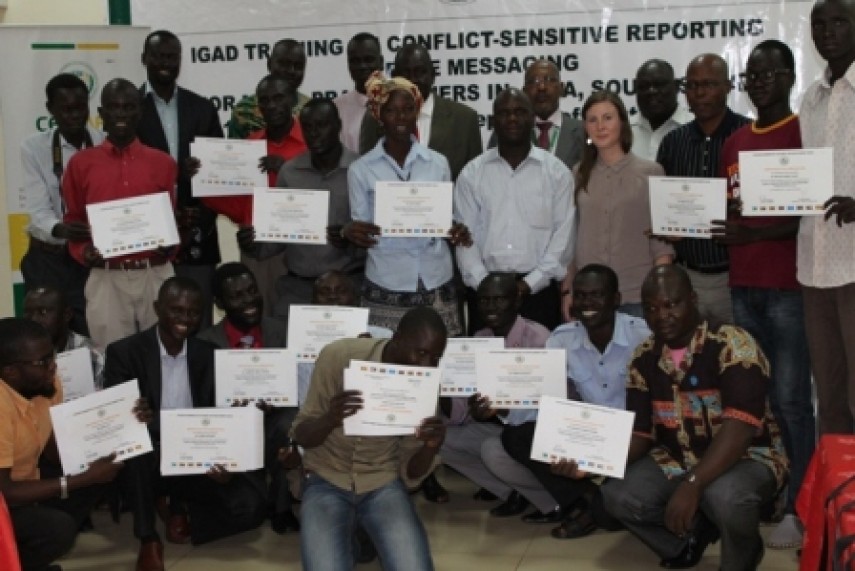 CEWARN and the IGAD Mediation Support Unit (MSU) co-convened training on Conflict-Sensitive Reporting and Peace Messaging for South Sudanese Journalists from 18-22 May 2015 in Juba.

The main aim of the training that brought together 21 South Sudanese journalists working in Television, Radio, Newspaper and Web-based media outlets from across South Sudan, was to equip them with critical skills that will enable them to execute their duties effectively in situations of conflict.

The training was also aimed at exposing the journalists to IGAD’s work in promoting peace and security in the region as well as co-opting them into a long-term partnership for peace building and conflict resolution in the IGAD region.

During the training, CEWARN Director Mr. Richard Barno engaged the journalists on responsible reporting in conflict situations and presented to them CEWARN’s regional operations as well as the mechanism’s tools, architecture, networks and the huge significance of the media in CEWARN’s operations.

The subjects that were covered by the five-day training include: Understanding Conflict; Conflict Analysis; Theory and Practice of Conflict Prevention, Management and Resolution (CPMR); Mediation Processes; Media and Conflict; Evolution of Media theory; Media Ethics and code of Conduct; as well as skills in conflict sensitive reporting and peace messaging.

CEWARN and MSU intend to conduct similar training programmes in other IGAD Member states as well as expand the programme towards progressively building a robust partnership with media in regional preventive diplomacy efforts.