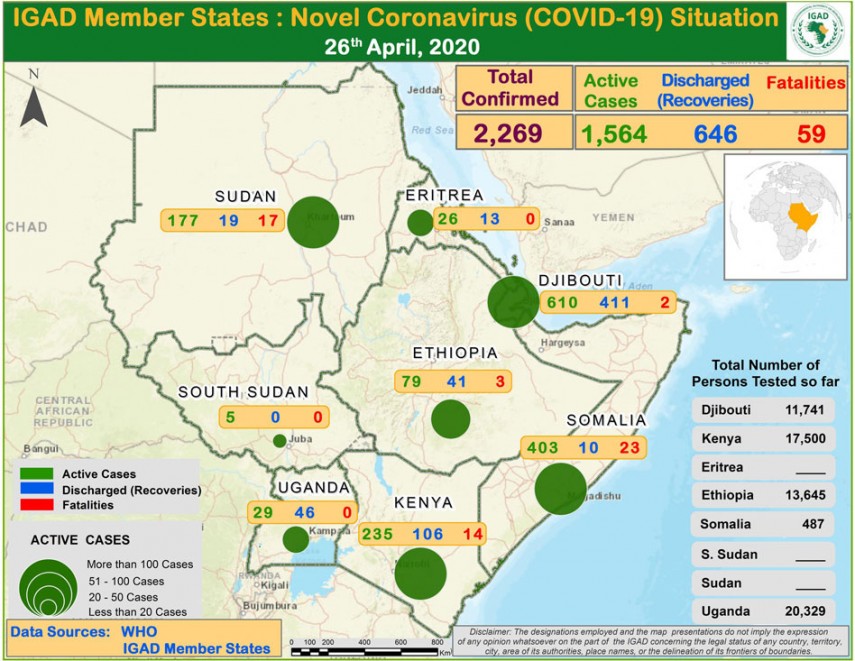 CEWARN continues to monitor the situation and has so far made the following observations on its anticipated impacts:

•   The well-known limitations of health systems and the limited health workforce to population size ratio as well as meager critical care capacities in the region would make it difficult to manage in case of a spike in local transmission of the pandemic;

•   The pandemic comes at a time when the region is still recovering from a series of natural disasters including floods and droughts as well as the worst desert locust invasion in 25 years. The region is currently bracing for a second invasion. The cumulative effect of these challenges is likely to have devastating consequences for food security and livelihoods across the region;

•   In terms of peace and security, the pandemic is expected to derail the pace of important transitions that are ongoing in Somalia, South Sudan and Sudan. Somalia was slated to have its highly anticipated first ever one-person-one-vote elections in early 2021. The election is considered to be a historic milestone, which would set the country along a path back to security, stability and prosperity following decades of civil war and political crisis;

•   South Sudan has also recently established Revitalized Government of Transitional National Unity (R-TGoNU) and the pandemic has already caused delays in the completion of some important pre-transitional tasks such as the reconstitution of the Transitional National Legislative Assembly (TNLA). This was expressed as a serious concern by the IGAD Council of Ministers when it convened on 23 April 2020;

•   Sudan’s momentous political transition and ongoing efforts towards economic recovery are also likely to be disrupted due to the burden posed by managing the COVID-19 pandemic;

•   Furthermore, the pandemic is expected to impact preparations for upcoming elections in Djibouti (2021), Ethiopia (August 2020), Uganda (March 2021) and Kenya (2022). Election preparations including the nomination of candidates, the review and update of voter registers and related tasks will all risk delay due to lockdown measures in all these countries. This is taking place in a context where some election dates are constitutionally mandated and fixed, and in some instances, for example in Ethiopia, the last possible constitutional extension has been reached. These extensions and the ripple effects could cause discontent among the general population; and

•   Lastly, job losses and severe economic strain on the majority of the population could push many to desperation and result in a rise in crime.